Do millisecond pulsars have a minimum ellipticity?

tl;dr - The current millisecond pulsar population is suggestive that the answer is yes (with caveats), which would be very nice for the potential for observing gravitational wave from these pulsar with future gravitational wave observatories.

Millisecond pulsars (MSPs) are neutron stars, the extremely dense remnant cores of massive stars, that we observe to rotate very, very rapidly. In fact they spin with periods of a few milliseconds (meaning that they have surface velocities that are a few percent of the speed of light!), hence the name. They also have very strong surface magnetic fields of around 10,000 Tesla (the Earth's surface field is around 0.0001 T). So, to use the word again, they are pretty extreme. But, while they are characterised by some very large numbers, they also must be very smooth (and symmetric throughout the star). Or, to put it another slightly more technical way, they have a very small ellipticity, which is roughly speaking the difference in the radius of a the star along two perpendicular axes on a plane cutting through the star's equator, divided by it's polar radius. It's essentially the size of the biggest "mountain" or "bump" on a star compared to its total size. For the Earth the 'ellipticity' caused by Mount Everest (at 8.85 km) compared to the Earth's radius (6371 km) is ~0.001. By looking at how fast millisecond pulsars1 are observed to slow down (more on which is described below) we can work out that they can't have ellipticities greater than ~0.00000001, which translates to maximum mountains sizes of  ~0.1 mm given their radii of ~10 km.  So, we can infer that they can't have mountains above a certain size, but is there a minimum size to those mountains too?

Some colleagues (Graham Woan, Bryn Haskell, Ian Jones & Paul Lasky) and I have just released a paper looking to answer this question, which at least suggests that the answer might be yes. How this paper came about is interesting. In April myself (and the above colleagues) were all attending a workshop in Seattle at the Institute for Nuclear Theory. For this workshop Graham was putting together a talk titled "What can we learn from joint EM/GW observations of pulsars?" in which he produced a standard plot of the pulsar population often called a P-Pdot diagram. This is a plot that shows the base-10 logarithm of pulsar period derivatives (the rate at which their period is increasing, i.e., how quickly they are slowing down as they lose energy) against their period. (As a bit of a plug for myself) To create this he used a bit of software written by me, called PSRQpy, that downloads the latest pulsar information from the ATNF Pulsar Catalogue. On this plot you often see straight line contours running diagonally across the plot with slopes of -1, which represent the path that pulsars would evolve along over their lifetime if they had specific surface magnetic fields and lost energy primarily through magnetic dipole radiation. You can also plot similar lines for pulsars with certain ellipticities assuming they are losing energy primarily through the gravitational radiation cause by this ellipticity. These lines are a bit steeper with gradients of -3. When Graham plotted these ellipticity contours, in particular the line corresponding to an ellipticity of 10-9, he noticed that it looked like it provided a cut-off in the population of millisecond pulsars in the lower-left of the diagram (see slide 3 of Graham's talk). This was intriguing, but what could it mean? Well, it would suggest that there was some period-dependent process that dictated the minimum Pdot that a pulsar could have, and that that process might be gravitational wave emission from a common minimum ellipticity. But was this cut-off that we saw real (i.e. are there really no pulsars below the line), and if so what could cause it?

The first thing we needed to check to see whether the cut-off was real was that the period derivatives (Pdot) we were plotting were the true values. Observed Pdots are not the true, or intrinsic, Pdots of the pulsars. The observed values get contaminated by any relative motions and accelerations of the pulsar with respect to the Earth. In particular the proper motion, or relative velocity perpendicular to the line-of-sight, and differential galactic rotation between the Earth and pulsar, will alter the observed Pdot value. If you know the proper motion and distance to the pulsar, then you can correct for this to get the intrinsic Pdot values. So, this is what we did. The accelerations of pulsars in globular clusters can effect the observed Pdot value so much that it is completely swamped. In the majority of cases it is difficult to correct for this, so we ignore these globular cluster-based pulsars. But, as shown in the plot below, which is a close-up P-Pdot diagram for just the MSPs, a cut-off still seems to be present when using intrinsic Pdot values.

Could this just be an observational selection effect, i.e., is there some reason why astronomers are biased against seeing pulsars in this region? Well that is a possibility, and by putting the paper out we are interested in hearing whether this is the case, but we could not think of any reasons why a selection effect causing such a cut-off would be present.

But, can we assign some significance to the reality of the cut-off and compare the evidence for different types of cut-off? If we make some assumptions we can. The details can be found in the paper, but we found that having a cut-off with a negative slope with a gradient2 of ~-3 (the best fit was around to at -3.6) was far better at explaining the observed P-Pdot diagram than having no cut-off at all. And a slope of -3 (which would suggest a process related to gravitational wave emission given a common minimum ellipticity) was ~35 times more likely than a a slope of -1 (which would suggest a process related to magnetic dipole emission and some common minimum surface magnetic field). If we assume a slope of -3 then the best fit cut-off position corresponds to an ellipticity of ~5×10-10 (this assumes a moment of inertia for the star of ~2×1038 kg m2, which is twice the value of the canonical moment of inertia used for the contour lines in the above plot, but means that the same gravitational wave amplitude would be produced as with an ellipticity of 10-9).

But, are there any known processes that mean MSPs might have a minimum ellipticity? Well, for quite a while it has been assumed that there was a minimum ellipticity cause by internal magnetic fields within the stars. But, this minimum value was very uncertain, depended on the internal field strength, and could have been several orders of magnitude below 10-9. However, we know that younger pulsars, which must be the progenitors of millisecond pulsars, have far larger (~1000 times) external surface magnetic field strengths. If similar field strengths were buried inside the stars during their accretion phase, and the interior of that stars are superconducting, then these could well be enough to give the required ellipticities. But, maybe we don't have to even invoke internal magnetic fields and superconductivity. Centrifugal forces mean that these rapidly rotating neutron stars are actually oblate spheroids (indeed their oblateness means they're 10s of metres wider around their middle than at their poles, which is a much large deformation that the ellipticities we have mentioned, but as the oblateness is spherically symmetric it does not induce gravitational waves). As MSPs are spun-up during accretion (or as they spin-down during their non-accreting lifetime) they will naturally want to assume a more (less) oblate shape, but the stiffness of their crusts will prevent them from changing shape... until it breaks. If the crust breaks un-evenly in order to reconfigure to the new shape, then this can provide a source of ellipticity. It has very recently been suggested that this uneven breaking is indeed occurring and leading to ellipticities of ~10-8, and in fact this is limiting the maximum speed at which MSPs are observed to rotate at.

So, what does this mean for gravitational waves and our prospects of observing them from MSPs. Given the assumption that all MSPs have ellipticities of 10-9, we worked out what their gravitational wave amplitude at Earth would be. We then worked out how strong we expected any signals from them to be in a variety of gravitational wave detectors over an observation period of a year: the Advanced LIGO and Advanced Virgo detectors operating at their design sensitivity (see, e.g. figure 1 of this paper); a pair of upgraded Advanced LIGO detectors called A+; a potential future "third generation" gravitational wave detector called the Einstein Telescope; and, another  potential future detector called Cosmic Explorer. The signal-to-noise ratios3 (SNR) for the different detector networks are shown in the figure below, where the filled histogram represents the assumption that all pulsars have ellipticities of 10-9 (the more optimistic un-filled histogram represents the SNRs you would expect if the pulsars were emitting such that all their slow down were due to gravitational wave emission). We see that for the advanced detectors, and their upgrades to A+, the SNRs would be rather small (< 5), which would most likely be rather tricky to be able to confidently detect. However, third generation detectors would be able to see many sources with SNRs greater than 10, which should be easily detectable with high confidence. If we're feeling more optimistic, and go with ellipticities of 10-9 being a minimum, but with some distribution above that, then we might expect SNRs to be somewhere between the filled and un-filled histograms in the figure, in which case the advanced detectors may be well placed to see signals from MSPs in the not to distant future! 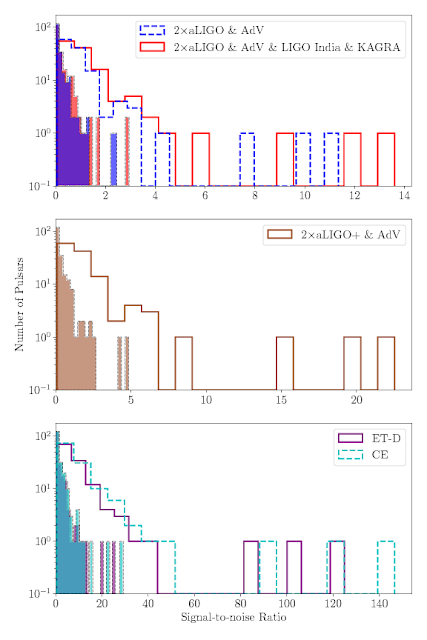 So, if there really is a minimum ellipticity then things a looking fairly optimistic for a gravitational wave observations. Of course, our hypothesis would be quite easy to disprove if some MSPs are observed to be in the lower left-hand gap in the P-Pdot diagram.

1Non-millisecond, aka "young", pulsars are a different matter!
2The paper mainly talks about braking indices (see, e.g. Section 1.3 of this webpage) rather than gradients in the P-Pdot diagram. The gradient in the (base-10 logarithm) P-Pdot diagram is related to the braking index, n, via -(n-2). For magnetic dipole radiation n=3, while for gravitational radiation from a star with an ellipticity you would have n=5.
3These signal-to-noise ratios are the average you would expect when not knowing the orientations that the pulsars have with respect to the detectors. If the pulsars were optimally oriented these values would be about 1.7 times higher. They also assume a particular moment of inertia and distance to the stars (for the spin-down-based limits), which are themselves uncertain by factors of about two.
Posted by Matthew at 2:46 pm